The difference between RYUJIN (龍神) and Dragon 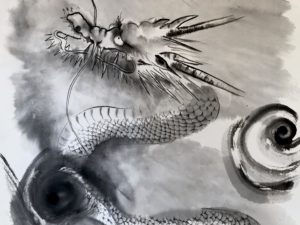 The difference between 龍(Ryu) and Dragon

I started painting 龍(Ryu) and now I am attracted to 龍(Ryu）.

When we try to translate 龍(Ryu) into English, it is often said “dragon”.

However, dragons in European countries and 龍(Ryu) in Eastern countries like Japan are totally different.

In eastern countries and Japan, 龍(Ryu) is called “RYUJIN” and it is a god.

On the other hand, in European countries, dragon is a bad evil creature.

They look alike but they are not the same.

What is in common is, they are both imaginary reptile creatures.

Personally, I like Japanese RYUJIN better, as RYUJIN has a longer body and looks cool.

Japanese RYUJIN can often be seen at temples or shrines.

At the entrance of temples and shrines, there is a water running spot, called “Temizusha”(手水舎).

This is a place to cleanse our hands and mouth before entering temples and shrines.

There, you can see water is running from RYUJIN’s mouth. 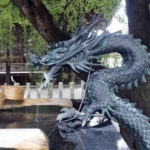 RYUJIN has been believed to be a god which brings rain and brings good harvest.

We see many Kakejiku paintings of RYUJIN going up to the sky, surrounded with rain clouds which RYUJIN created by itself.

There is also a sacred ball which RYUJIN holds.

It is called “Cintamani stone”, which makes your dream come true.

That is why we have RYUJIN god Kakejiku hanging scrolls hung in the house since ancient times.

By the way, why does good luck god have that scary face…?

But there is a reasonable reason.

In order to fight and get away the evil spirit, RYUJIN has such a scary face.

We often see Tiger glared at us with its powerful scary eyes on Kakejiku.

That is to fight and get away the evil spirit.

Anyway, I am attracted to RYUJIN,

and my RYUJIN art is increasing little by little…

Drawing RYUJIN god is a great practice of life for me. 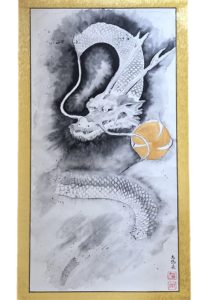 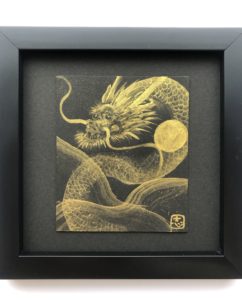 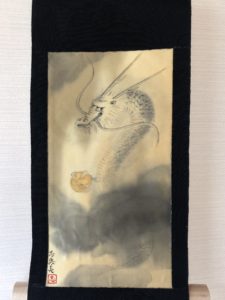