Mt. Fuji is the highest mountain in Japan, the altitude of 3,776m.

It is well known not just in Japan but in the world as the world heritage site.

The reason Mt. Fuji was selected as a World Heritage Site, is not only for its value as a famous mountain of nature and beauty, but also for the faith held by the Japanese in the existence of Mt. Fuji and its value as a source of art born through Mt. Fuji.

Since ancient times, Japanese people felt divinity in Mt. Fuji and admired it as the symbol of spirituality.

They looked up Mt. Fuji and prayed.

How did Mt. Fuji become a mountain of prayer?

Mt. Fuji is the symbol of “mountain worship”.

“Sangaku-shinko ” 山岳信仰”  is a faith worshipping mountains as being sacred.

So what is “Sangaku- shinko” -mountain worship?

Japan is an island country, of around 75% of the land being occupied with mountains and forests.

This fact already made people have strong connections with mountains.

In the old days, the souls of the dead who left their bodies were thought to climb mountains.

When Buddhism was transmitted, people started to believe the souls of the dead climbed the mountain and they would become Buddhas at the summit. As a result, the mountain has come to be regarded as the most sacred place where God and Buddha live together.

There are many shrines in and around mountains, and of course Mt. Fuji also has shrines called “asama shrine”浅間神社“ on its summit and around it as well. 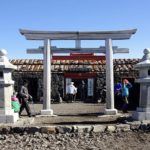 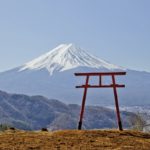 That is because Mt.Fuji is God himself.

On the other hand, Mt. Fuji is a beautiful active volcano.

There has not been a major eruption in the last 300 years since the last eruption of 1707, but it has a history of being feared not only as beautiful but also as a scary mountain.

Asama Shrine, which is scattered throughout the Mt. Fuji area, also has a deep desire to calm the terrible disaster.

In Western Europe, nature, including mountains, should be conquered by the power of God. There is a big difference from Japan, which feels the sign of God and Buddha from rich nature and thinks that the mountain is a god.

That is the reason that Mt. Fuji is very special mountain for Japanese people.

And as a source of art, famous painters and artists left behind their works that were in some way in connection with Mt. Fuji, especially since Edo period.

From folding screen paintings, fusuma paintings, hanging scrolls, the pilgrimage mandala, which is the object of faith, and as well as the decoration of crafts such as costume patterns, daily fixtures, and furnishings, countless figures of Mt. Fuji were drawn.

I myself, love to draw beautiful Mt. Fuji.

Mt. Fuji has the power to captivate a person from a first look. 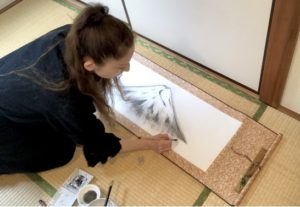 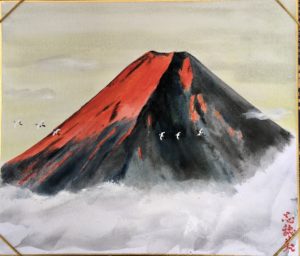 Mt.Fuji in the sunrise painting 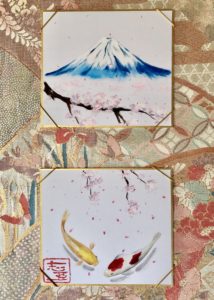 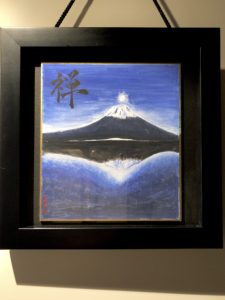 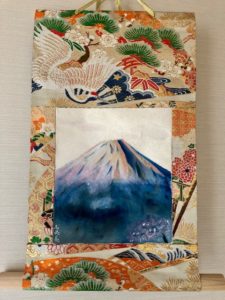